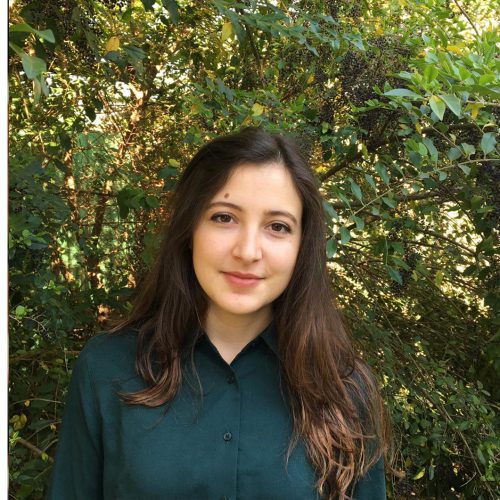 Olga Verlato is a PhD candidate in History and Middle Eastern and Islamic Studies at New York University. Her research examines the cultural and social history of modern Egypt, focusing on the question of linguistic diversity, multilingual printing, and education. She has conducted archival research in multiple languages and various sites across Egypt, Italy, France, and the United Kingdom.

Throughout her academic career, she presented her work in numerous occasions, most recently at the conference “Italy and the Suez Canal” in Torino, Italy, and the workshop “Currents and Currency: Cultural Circulations in the Mediterranean and Beyond” in Antalya, Turkey in summer 2019. Her work has appeared in a number of academic publications. Her article for the META Journal (Middle Eastern Topics and Arguments) was awarded the Falak Sufi Prize Memorial Essay Prize. In addition to researching for her doctoral dissertation, she is currently working on a forthcoming article on Italian education in Egypt to be published in an edited volume with Palgrave Macmillan. Throughout her academic career, she has received a number of fellowships, including the 2020 NYU Paris Visiting Graduate Fellowship, and the 2018 R. Bayley Winder Summer Language Fellowship.

Paper Abstract: Printing Arabic Manuscripts in the Sixteenth Century: The Medici Oriental Press, from North Africa to Rome and Back

The paper examines the history of the sixteenth-century intellectual and professional network that originated around the activities of the Medici Oriental Press in Rome. Starting in 1584, the Press financed expeditions to collect prestigious manuscript editions in North Africa, Ethiopia, and the Middle East (including al-Idrīsī’s Descriptive Geography, Ibn Sīnā’s Canon, and a series of Arabic grammars) based on their perceived aesthetic qualities and the benefits of their content. Additionally, it recruited experts from the region who would collaborate with orientalists and printers in Rome to produce books visually similar to manuscripts that were then to be sold across the Ottoman provinces. My paper reconstructs the journey of such texts and individuals, from the selection and collection of the manuscripts, through the production of Arabic type-fonts and printed editions, to the Press’ attempts to sell the final products.

On an empirical level, my paper sheds light on the history of a largely unexplored transregional network of material circulation and knowledge production, uncovering a space of multilingual and multi-sited collaboration and exchange. Moreover, from a methodological perspective, I problematize the power structures involved in the Medici project. The paper thus retraces how specific notions of aesthetic and pedagogical value attached to the manuscripts affected their printed renditions, and what preconceptions there existed with regards to the taste of these works’ imagined consumers from North Africa and the Middle East, as well as of manuscript readers more generally, when confronted with such early and virtually unprecedented instances of Arabic printing.

All Sessions by Olga Verlato