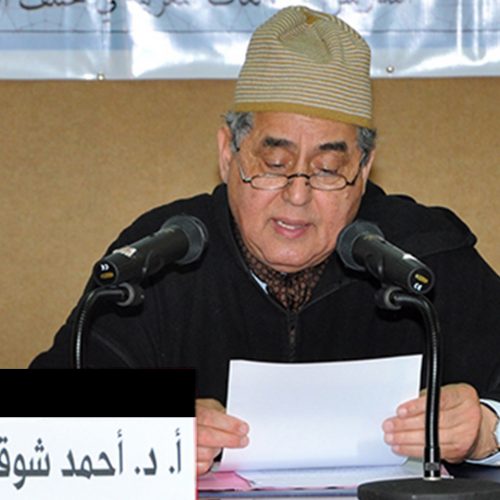 Dr Ahmed Chaouki Binebine was born in 1946 in the city of Marrakech, Morocco. He works in the Hassania Treasury at the Royal Palace (Bibliothèque al-Hassania) in Rabat, Morocco. He received his Ph.D. degree from the French University in 1986 on the topic: Tarikh khazayin al-kutub fi al-maghrib, and a Ph.D. degree from the Sorbonne University in 1975, on the topic: Tatawur al-mustalah al-sufi min khilal diwan ibn al-farid.

Dr Ahmed Chaouki Binebine held several positions, and assumed many responsibilities; including: Professor of Higher Education in 1986 at the Faculty of Arts of Rabat, Director of libraries, manuscripts and documents in the Ministry of Culture in 1994, and Director of the Royal Treasury (Bibliothèque al-Hassania) from October 1994 until today. He is also a member of many international centres, academies, committees and councils.

He has several publications, including; Mujam mustalahat al-makhtut al-arabi in partnership with Dr. Mustafa Toubi, and Tarikh al-maktabat fi al-maghrib in French and Arabic (translation of Mustafa Toubi 2002 under his supervision), and many others.

Dr Ahmed Chaouki Binebine has supervised and discussed hundreds of theses and dissertations in various Moroccan and foreign universities.

The Arabic manuscript heritage is the most prolific heritage in the universe, and African manuscripts, whether in Arabic or in African dialects written with the Arabic alphabet, are considered a part of, a substitute for and a continuation of the Arabic literature in African regions.

The subject matter of this paper is a historical, paleographical and codicological review. In other words, it is an overview of the genesis of these books and the evolution of their contents. Therefore, it discusses their calligraphy, its types, origins and transcription methods, and the use of the Arabic alphabet for their writing, in addition to other paleographic issues related to African calligraphy. In its essence, it touches on the used writing tools and materials such as vellum and paper, and researches the ways in which they were manufactured or imported and presents the opinions of some of the great specialists in African books such as the French orientalist Octave Houdas, 1916 AD, and the British orientalist John Hunwick, 2015 AD. Then, we pose the following question: Are these suggested readings possible? The answer will be partial, because what is available in our hands of this heritage is scarce and most of it dates back to the nineteenth century with a small part written and copied before that time. Also, because this heritage was neglected and marginalized by the natives and French orientalism which gave all the attention to the Arab heritage in North Africa. In general, this heritage is still in the stage of collection, discovery and indexing, and has not yet reached the stage of studying, drawing conclusions and making judgements, despite the efforts made by international organizations such as the UNESCO in an attempt to collect this heritage in order to write a new history for West Africa. The oral source was the dominant element in writing this heritage since the eleventh century, similar to what we see in the Tarikh Al-Fattash chronicle and the History of Sudan of Abdul-Rahman al-Sa’di, and others like Ahmad Baba al-Timbukti except for the translations of some of his contemporaries and those who preceded them especially in his two books Nayl Al-Ibtihaj and Kifayat Al-Muhtaj, which are both based on Ibin Farhoun’s Al Dibaj Al Mouthahhab, 799 Hijri. The oral source remained the basis of knowledge until the end of the twentieth century.

The evidence for the importance of this heritage and the necessity of researching its private collections in particular is that from time to time it leads to the discovery of precious Arab works like what happened in 1999 when the Al Darouri Fi Sina’at Al Nahu of the great philosopher Ibn Rushd, 595 Hijri, was discovered after it had been lost for several centuries.

All Sessions by Ahmed Chaouki Binebine